Ashley Ward Nominated for G4C Mentor of the Year Award 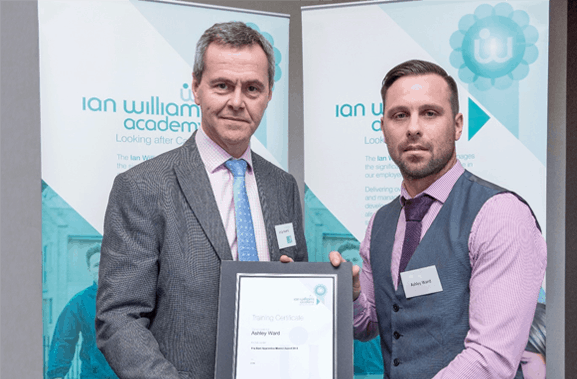 Ian Williams is delighted to announce that Contracts Manager Ashley Ward, has been nominated by the CITB for Generation for Change Mentor of the Year in the Constructing Excellence South West awards for his outstanding contribution to apprenticeship training.

Jo Down, Academy Officer at Ian Williams comments on the nomination: “Ashley Ward is an exceptional mentor who goes above and beyond to help his team, especially the apprentices, to succeed. He was voted Ian Williams’ Best Apprentice Mentor 2018 so it’s excellent that his efforts are also being recognised by such a prestigious organisation as the CITB.

A former apprentice himself, Ashley is well placed to offer practical advice about the highs and lows of apprenticeships.  When commenting on his nomination, he pays tribute to those who mentored him and had a positive influence on his career: “I have been very fortunate in my career. I had many mentors as an apprentice and recognise the input each one of them had into my development. Thanks to the fact I’ve ‘grown up’ within the Ian Williams’ mentoring programme, I’m able to directly pass on the skills I gained from those who had a positive influence on my career path. I try to treat every apprentice the way I was treated by the majority of my peers – so really this award nomination is for the people who mentored me, as it was them who gave me the tools to do the same.”

Heather Hughes, Apprenticeship Officer at CITB who made the nomination explains: “When asked if I knew of anyone who deserved recognition for mentoring apprentices, one colleague instantly came to mind.  We work with so many fantastic employers and apprentices, but in my time at the CITB, Ashley Ward has gone above and beyond to support all the apprentices in his care and believe me it’s not always been plain sailing.

“Not only has Ashley been a superb support to his apprentices, but as a new staff member for the CITB, he welcomed me and offered support and guidance.  I certainly valued this and it made my job that much easier.

“My nomination for Mentor of the Year for Ashley Ward of Ian Williams was an easy one to make. Part of the criteria for the G4C Mentor of the Year award is an individual who has shown commitment to developing future leaders, investing time, nurturing and supporting them. Ashley ticks all these boxes.”

Congratulations to Ashley and our fingers are firmly crossed ahead of the ceremony which takes place on 19th April in Exeter.