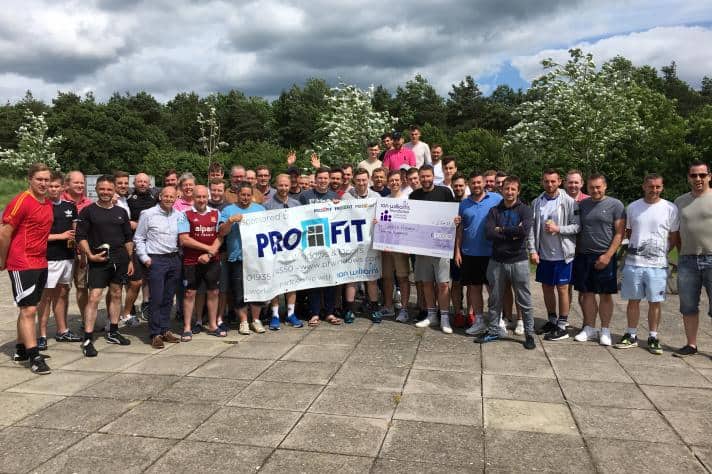 This summer marked the long-awaited return of the Ian Williams Annual Football Tournament, which was held at the Cirencester Indoor Arena on Saturday 3rd June.

Seven teams representing Birmingham, Maidstone, Epsom, Cardiff, Bristol and a Joint venture from Head office & Chamberlains took to the turf to compete for the illustrious Ian Williams Trophy – which this year was kindly sponsored by subcontract partner Pro-Fit Windows & Doors,  who also entered a team themselves.

A hotly contested group stage saw Pro-Fit dominate Group 2 with 3 wins from 3, with Head Office/Chamberlains taking second spot; Group 1 saw Maidstone then Cardiff take the top spots in their group – separated only by a penalty shoot-out to decide who took ranking.

In the Champions Trophy, Head Office/Chamberlains pulled off a stunning turnaround and came from 2-nil down to see off Maidstone 3-2 in the first semi, with Pro-Fit joining them in the final after dispatching Cardiff 4-2. Pro-Fit then repeated their Group Stage win, with a resounding 5-1 result against Head Office/Chamberlains, deservedly leaving the tournament with the main trophy and a 100% undefeated record.

In the Shield, Bristol Capital came out the ultimate winners, beating Birmingham Response 4-2.

Pro-Fit’s Sponsorship of the event enabled all Team Entry Contributions and the proceeds of a post-match raffle to be split between two charities – Cancer Research and Dementia Awareness – who benefitted from the £1,000 raised on the day.

Thanks go to Jason Base (Head Office) and Richard Croucher (Maidstone) for their efforts in arranging the event who have since received numerous requests to lock down a similar event next summer or earlier – watch this space!