£75,000 donation to
More Than Homes
and The Trussell Trust 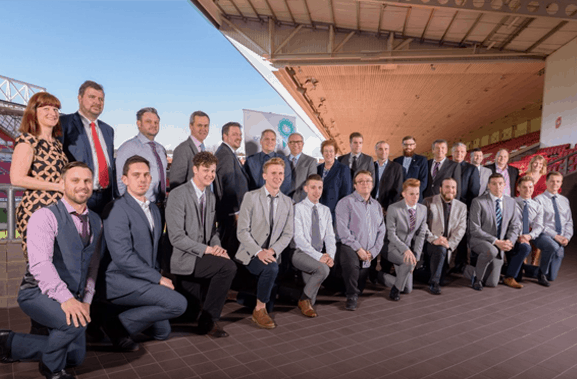 To coincide with National Apprenticeship Week 2018, leading property services specialist Ian Williams held its second Qualification Celebration Lunch at Bristol’s Ashton Gate Stadium. The event which was attended by 32 people, celebrated the company’s apprentice, trainee and staff achievers and recognised the vital contribution they make to the business. Ian Williams is committed to direct delivery of its services and has pledged that 10% of its total workforce will be made up of apprentices. This programme is managed by the Ian Williams Academy which delivered over 4,000 days of training and personal development in 2017.

Sian Pearce, Ian Williams’ Training and Development Manager, welcomed the day’s achievers and also announced the launch of this year’s twenty-two vacancies – for which the company has already had 150 applications within two days. As well as celebrating the achievements of those that have successfully gained qualifications, a large emphasis was placed on the mentors that support the trainees throughout the business.

Ashley Ward, Contract Manager, was presented with the Best Apprentice Mentor Award by Ian Williams’ MD Andy Havard, who commented: “Ian Williams has strong processes and systems in place, but it’s the people that are responsible for our success. As a strong advocate of apprenticeships, we currently employ fifty-eight apprentices across the business, but they can only thrive with the dedicated support of those that act as mentors. This inaugural award was created in recognition of the dedication of those directly involved in supporting our apprentices. Ashley Ward was nominated by his team for the commitment he gives to ensuring his apprentices are well supported and their workloads are varied so that they can gain as much experience as possible to become valued members of the team. Congratulations to everyone today for their achievements.”

Training is so important at all levels of Ian Williams that the Academy offers more than just apprenticeships and trainee programmes. Amongst this year’s fifteen celebrants were two Contracts Managers who have gained professional qualifications in leadership.

This year’s Guest Speaker was Mark Whitby from CITB who commented: “I am inspired by the achievements here today. The Ian Williams’ Academy model has been developed over many years and the level of support it provides is unrivalled and highly regarded. In fact, we often refer to the ‘Ian Williams Model’ as the benchmark to aim for when talking to industry. It is an exciting time for apprentices joining the construction sector. Over 160,000 jobs, at all levels, are likely to be created over the next five years as demand for new housing and infrastructure increases. I encourage these apprentices to continue with their learning – ‘life-long learning’ is the buzz word of the moment and the opportunities to progress are ripe.

“The ethos behind National Apprentice Week is to encourage people into construction and this is one week of the year when we celebrate the real achievements made by the apprentices that have started on their journey. The recruitment model at Ian Williams is overwhelming and the engagement they have seen since the launch is a massive achievement. I look forward to meeting the next round of apprentices to join the Ian Williams Academy.”

During the day, we had chance to talk to the successful apprentices and trainees. Here’s what they had to say about their experiences so far with Ian Williams:

“I completed my training in April 2017 and now work as a fully practising surveyor in London. I joined the programme after gaining a degree in Human Geography and Planning, firstly in Cardiff and then on secondment in Salisbury. Being seconded to Salisbury was a very important part of my training as it gave me insight into other products of the business and different ways of managing clients and workloads – I gained a lot from my time there. All my training has been on the job since day one, being given real projects to run from the start is a true reflection of the accountability you have as a surveyor, but it was never too daunting as you are supported every step of the way.”

“I joined the surveyor training programme in November 2013, straight from A-Levels. I always wanted to be a Building Surveyor and have been working on internships throughout the summer to gain experience. I had two formal interviews – one with HR and one with managers from the business. Although it was a very formal process, everyone I dealt with was so supportive and encouraging. The best thing about the training was working whilst I learnt and the perks that come with that, like the employment package I was given from the start. You start working on real projects straightaway – I was given small projects with real clients to run from start to finish, and as my experience grew so did the level of responsibility. There was no one point where I felt I had transitioned from being a trainee. I particularly enjoyed my secondments, not just for the professional development but from a personal perspective too as I was living away from home for the first time.”

“I completed my training in December and now working as a fully-fledged painter in Plymouth. The best part of the training process was learning, and then putting what I had learnt into action on a daily basis to achieve my goals. I am really enjoying the variety that my role offers.”

“I qualified last year and now working in London on lots of social housing and older persons living. Over the four years I have been with Ian Williams I have grown and developed – at first it was a real struggle straight out of school, but it quickly became easier and I have enjoyed the balance of learning and working. There is a great chain of support, the training is well funded and you are being taught skills by lots of knowledgeable people. Ian Williams is a big company that provides lots of opportunity and I would like to see myself as a foreman within the business in the next few years.”

“From day one of my training I was given real work and real responsibility. My role within the business is to develop new projects and client interfaces, as well as providing support and maintenance to our current systems. I am based in Chipping Sodbury but completed my training in two week blocks in London, where all my expenses were covered by the company. I learned a lot very quickly and the support from colleagues across my entire team has been vital to my learning.”

“I have been with Ian Williams in London for four years, joining the trainee surveyor scheme after gaining a university degree in Accountancy & Business. Much of the work we undertake is full renovations, so I can exposure to all trades and this level of diversity meant there was never any need for me to go on a secondment. Since I qualified 18 months ago, I have been working on large contracts with Origin Housing and Eton College.”

“I joined Ian Williams in September 2014, working in Cardiff as a Wood Operative Apprentice. The best part of the training is the work/ study balance – in my first year I attended college three days a week, going down to one day in year two and three. Carpentry is a skilled job and I strongly believe that it wouldn’t be possible to learn those skills without the on the job learning an apprenticeship offers. You get a lot of support from your mentors, you are gaining skills and you are getting paid well at the same time.”

“I’ve worked at IW for 2 ½ years now. I am now qualified in Plastering and have been told this is the first plastering apprenticeship that has been completed at Ian Williams. I completed my apprenticeship up to NVQ level 2 with City College, Coventry. I work for the response team so there are many calls during the day and I enjoy visiting the tenants and sorting out their issues. My apprenticeship really prepared me for my role as an operative by giving me the confidence to work in people’s homes alone and to make decisions.”

“I’ve worked at IW for 4 years now and I am now qualified in Painting & Decorating, after completing my apprenticeship up to NVQ Level 3. I went to Neath & Port Talbot College as this was the closest to my home in Swansea. I really enjoy the work and meeting new people, I’ve done a lot of external painting on flats and houses recently the weathers been a bit cold recently. This is when you appreciate working inside. I worked on an MOD site last year in Bristol which involved painting railing with specialist coatings, but my favourite things to paint are staircases – I just really like doing them! My apprenticeship prepared me for my role as an operative by teaching me to work hard but to also have fun with the team as well. I learnt to drive so that I could get around sites myself and I now have two cars – one for work and one for fun. Not many people know this but I am a Dad to my 4-year-old son Leo. That makes me want to show him that I am working hard.”