Third Principal Designer Seminar is a hit in Cardiff 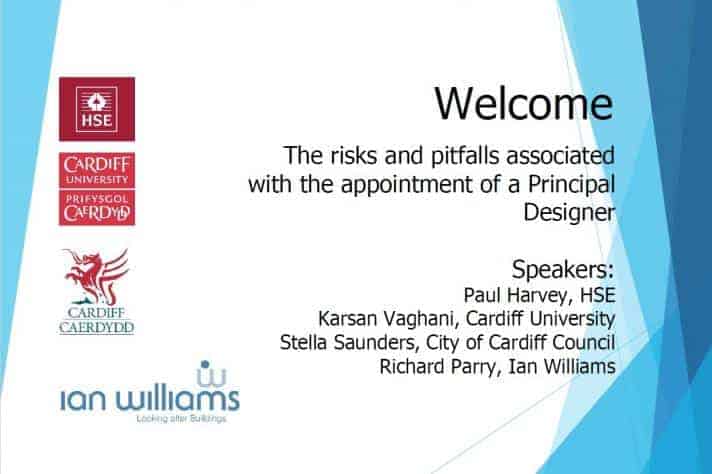 HSE’s Paul Harvey gave an overview on the background and expectations of the role, explaining that HSE expects a Principal Design to “plan, manage and monitor the pre-construction phase.” Paul explained the key aspects of the role, such as ‘to identify, collate and provide information to clients, designers and contractors, particularly in pre-construction’ and to ‘oversee the project from a Health & Safety perspective’.

Karsan Vaghani delivered a case study on the Cardiff University campus development, which he managed as Deputy Director of Estates at the University. Karsan explained the steps the project undertook from pre-construction to handover, highlighting what worked and what could be better regarding Health & Safety under CDM-2015.

Stella Saunders, Architect and Principal Designer, leads a small team to deliver the PD role at City of Cardiff Council’s Projects Design Development.  She eloquently discussed the structure behind the City of Cardiff Council’s development team and some of the projects she has been involved in, with focus on the role the PD has played throughout.  From a client’s perspective, she also explained the concerns the council has and the steps they are taking to overcome.

Richard Parry, Ian Williams’ Health & Safety Officer completed the line up by discussing the impact CDM-2015 has had on service providers such as Ian Williams and how they ensure standards are met when the company delivers either as PC, PD or a dual role, through their skill, knowledge and experience.

The seminar was rounded off with an opportunity for questions and open forum debate.

Thank you to everyone that attended.