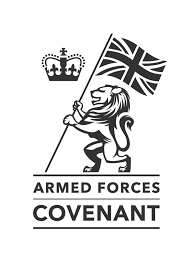 Ian Williams has officially signed to the Armed Forces Covenant in a move that shows our commitment to employing and supporting ex-military men and women moving into the civilian working environment. The Armed Forces Covenant is a promise by the country ensuring that those who serve, or who have served in the armed forces, and their families are treated fairly.

Olivia Withers, Ian Williams’ Recruitment Lead comments: “We have long recognised that reservists and veterans bring a variety of transferable skills and qualities to the civilian workplace, which they’ve developed throughout their military careers. We have a number of ex-military personnel in our business, including painters and decorators, surveyors, carpenters and Business Managers. Signing up to the Covenant is a fantastic way of formalising our ongoing commitment to supporting this important group of people when they leave military life.”

One man who knows exactly what it’s like to make this move, with the support of Ian Williams as an employer, is Richard Croucher, Business Manager: “I was in the Royal Engineers for 5 years before returning to civvy life. Fortunately, with the advice of my Dad, I was always aware that I’d need a trade to fall back on and that trade was in the building and construction sector and ultimately, property services at Ian Williams.

“The great thing about the military is its commitment to training, training and more training. Hard work, being the best you can be and great performance is recognised and rewarded – attributes that are well aligned with working with an organisation like Ian Williams. I joined them 5 years ago as a Contracts Manager and after 2 years, was promoted to Business Manager. I am now in the fortunate position where I can recruit and develop other ex-military men and women who share these attributes and help to create the strong team environments which are central to military life.

“Ian Williams is all about investing in people, just like the military. Discipline, respect and not being afraid to work hard are all recognised and rewarded. When people join us, our peer structure and mentoring schemes mean we can formally help them to transfer skillsets and disciplines engendered in the Army, RAF or Navy. Working here really is a career, not just a job.”

Ian Williams is always keen to hear from ex-military men and women who are looking for their next career steps.

Check out our latest vacancies across the UK