#Not Just For Boys… 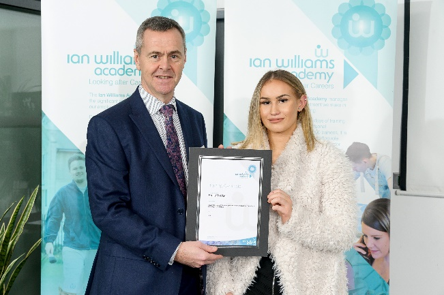 As preparations get underway for our 2020 apprentice and trainee surveyor vacancies to go live, we look at the growing popularity of painting apprenticeships for females wanting to start a career in the sector. We caught up with two of them after our recent National Apprenticeship Week Qualification Celebration Lunch and asked one apprentice, who has just qualified, why she has decided to do it.

Amongst the apprentices who completed their training this year was painter and decorator, Emily Walker. Achieving Level 3 Advanced Apprenticeship in Painting & Decorating, Emily whole-heartedly recommends an apprenticeship with Ian Williams and praised the support of her peers in helping her to gain her qualification, whilst learning on-the-job. Emily commented how developing her communications and life skills have been just as important as the painting and decorating skills she has learned. “Like any job, an apprenticeship can be hard at times, but my advice is to stick at it and push through. You won’t regret it. I’ve had an amazing time, hard work and fun, and I’m so glad I started the journey. In 5 years, I’d love to be in the same position as my foreman who has been a brilliant mentor who I really look up to.”

Nicola Nash started her journey with Ian Williams in business support and has developed to become a Surveyor in Wiltshire thanks to the support of her team – and her love of numbers! Nicola comments: “During the process I’ve gained a clear idea of the progression I want for my career, through learning on-the-job surveyor skills, combined with the more operational and commercial aspects of the role. My advice to anyone is go for it, especially in Ian Williams because the whole company is 100% behind you.”

Molly Hill is one of Ian Williams’ newest apprentices and at 16 years’ old, she already had her heart set on this career.  Molly comments: “I wanted to do something active in my work and I’ve loved painting rooms at home, so it made sense.  I chose an apprenticeship because I know it’s important to learn a trade, and I also wanted to start earning my own money.  I’m really happy working at Ian Williams as I love the team and working on site where I’ve learned to take feedback in a positive way. I’d like to finish my apprenticeship as soon as I can and then move on to becoming a foreperson and run my own projects at Ian Williams.

All of these woman are fantastic ambassadors for women in construction and Ian Williams is already speaking to even more young people looking for a career in this thriving sector as the 2020 applications for apprentices and trainee surveyor vacancies go live in March.